First of all, we would like to take this opportunity to wish you all a very merry christmas and a prosperous New Year!! And seeing as it is that time of year, we thought for our blog this week we would have some fun and take a look at some (not so obvious) traditions for christmas around the world.

We all know and love the popular traditions such as manger scenes, Santa Claus, christmas crackers, snowmen, candy canes and christmas trees…..but if you look hard you will discover many more interesting and different takes on December’s most famous day.  Who would’ve thought that christmas around the world could be so different…

So lets start with our own back yard – AUSTRALIA

As we all know, unlike other parts of the world our festivities this time of year are mainly held outside due to the hot sunny weather.  A traditional seafood lunch or bbq with friends and family at the beach, park or back yard accompanied of course, by the all important game of cricket! 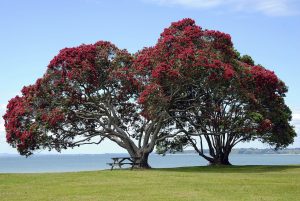 In New Zealand they don’t use pines as their traditional christmas tree, they are all about the pohutukawa tree there.

The pohutukawa is a beautiful native tree which boasts rich crimson flowers.

It was first recognised in 1867 by an Austrian geologist who witnessed locals decorating their homes and churches with the brightly coloured branches.  Today, children sing carols about the pohutukawa tree and it is seen on many christmas cards and decorations throughout this time of year.

New Zealand is one of the first places in the world to see the sun on Christmas Day and it doesn’t get dark in some parts until 10pm!

There is an old Ukraine folktale which tells of a poor widower who could not afford to decorate her family’s christmas tree.  It is said that some friendly spiders took pity when watching her cry so while everyone was sleeping they spun beautiful gold and silver cobwebs all over the tree for them to awake to on christmas morning.

The family were from that day forward extremely prosperous and today Ukrainians decorate their christmas trees with decorations that mimic the natural formations of spiders’ webs hoping to encourage wealth and prosperity for the coming year.

The French begin their christmas festivities from the 6th December with elegantly decorated towns and cities across the country.  In the Alsace region they decorate some christmas trees which date back as far as the fourteenth century.

Around midnight on Christmas eve French families eat a special meal to celebrate the very beginning of Christmas Day.  This is known as ‘Le Reveillon de Noel’.

Unlike other countries where stockings and nibbles are put out, the French children polish their shoes and leave them by the fireplace.  They wait in hope that ‘Pere Noel’ (Father Christmas) will fill them with sweets and presents.

According to Norwegian folklore, mischievous witches and spirits emerge and take to the skies to run amok on Christmas Eve.  Norwegian families traditionally hide away their broomsticks in order to keep any witches from finding them.

Did you know that one of the major Norwegian traditions actually takes place in the British Capital?!  Each year, London receives a huge Norwegian grown christmas tree to stand proud in Trafalgur Square.  During a traditional ceremony Norway will fell a 50-60 year old spruce from outside Oslo.   They send it as a token of gratitude for the help and support that Britain gave them during World War II. 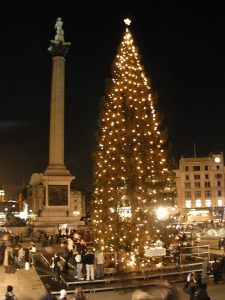 In this country there’s a festive superstition for single females to throw a shoe over their shoulder.  Should it land with the toe pointing towards the door then apparently it means they will be married soon.

Also on the eve of christmas many people will fast for the day in hope that they will see ‘the golden pig’ appear on the wall before they eat christmas dinner.  This golden pig represents good luck for the future.

On Christmas Eve, an evil creature called a ‘Krampus’ is said to wander the streets searching for naughty children.  So throughout December some Austrian people will wear ghoulish masks and play tricks on kids and adults alike. 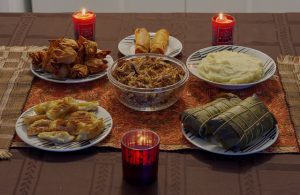 Each morning between 16th and 24th December the country’s capital closes many of it’s streets (to traffic).  This allows for masses of city dwellers, at 8am, to make their way to church services on roller skates.

Like all countries Venezuela has a number of tradition Christmas foods, one of which is called ‘Hallacas’.

Hallacas is a mixture of beef, pork, chicken, capers, raisins and olives.  These ingredients are wrapped in maize and plantain leaves then tied up with string.  It’s then boiled or steamed.

Speaking of traditional foods, in this country children are accustomed to eating fried caterpillars as part of their christmas meal. These caterpillars are colourful and known as Christmas caterpillars (aka the pine tree emperor moth).  They are said to bring good luck in the coming year to all who swallow them.

It is customary for a pickle to be hidden amongst the branches of the christmas tree.  Then when a child of the household finds it they are given a gift.

We hope that you have enjoyed reading about some quirky facts about christmas around the world.  If you would like to read more and learn about the founder of Inspired Spaces click here.