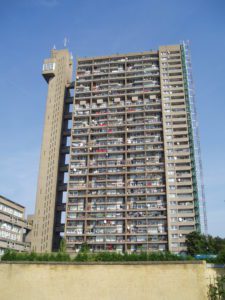 Walking around Notting Hill markets recently I passed a peculiar building in the South West of London. What I could only describe as being beautifully ugly this massive concrete block – 31 stories high was the famous Trellick Tower, a paramount example of brutalist architecture. The style of the building is characterised by massive concrete shapes colliding abruptly, while service ducts and ventilation towers are overtly displayed. Universally loved and hated it was designed by the wonderfully-named Erno Goldfinger in 1960.

Brutalism is a style with an emphasis on materials, textures and construction, producing highly expressive forms. Also called New Brutalism, this style mainly encourages the use of raw concrete. So intrigued by this architecture I set out on a quest to find more of these strange sorts of buildings.

As I learned 5 of the key factors to look out in Brutalist Architecture were: 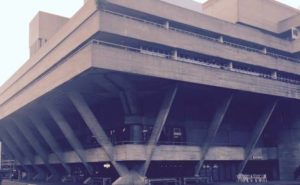 The first buildings that I sought out on my quest was the imposing mid-60s building famously starred as the ‘Ludovico Medical Facility’ in Kubrick’s legendary film A Clockwork Orange. Its jutting geometric forms and monolithic slabs of roughly finished concrete mark it as a classic example of mid-period Brutalism.

The second building I visited was the Southbank National Theatre. Almost appearing as a concrete space ship it’s also been compared to as a nuclear reactor and an overgrown car park. Nonetheless its complex and imposing concrete volumes have been popular with the public and there is an enormous amount to see and do in and around it. I did get lost trying to navigate my way through but I took enjoyment at looking at the texture of the concrete along the way. It had a variety of finishes, including the imprints left by the wood ‘shuttering’ (moulds) when the concrete was cast in situ.

The third and final building I made my way to was the Alessandra road estate – A high-density, low-rise housing project. This Grade ll listed building is mounted on rubber pads to minimise noise from the busy railway alongside. 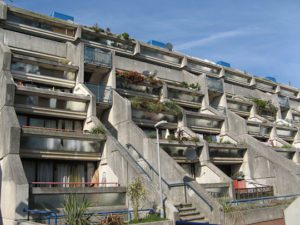 Its sheer scale and minimal windows adds to its grand appearance.

Overall brutalism’s bold, monumental, and on the whole, deadly serious style still remains controversial. Unfortunately after the 50s when the aesthetic demands changed; many people considered the buildings an eye sore and out of date. And over the years as the concrete on these buildings have turned even more grey or brownish the notion of being futuristic is completely gone. However if you Love or loathe these extraordinary buildings there’s no denying its impact in the architectural cityscape.