The Federation architectural period evolved in Australia at the turn of the century when, in 1901, Australian colonies collectively became the Commonwealth of Australia.

A Federation home is an Australian version of the English Edwardian House.  It drew on elements of Victorian style and Queen Anne revival period of 1895 to 1910.

The Federation style (built mainly between 1900 and 1912) was an ornate building featuring decorative motifs.  Australian flowers, along with the kangaroo and emu were all common on these homes.  Another common motif used was a sunrise on the front gable which celebrated the dawning of a new century. 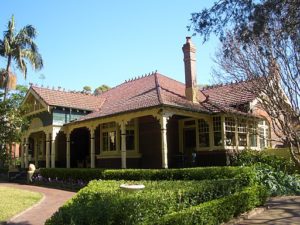 Federation houses were typically built in red brick or weatherboards.  Most often than not, they had a galvanised iron roof or terracotta roof tiles.

They were usually detached with gardens and had lead-light glass in the windows.

The ends of gable and roof eaves had detailed wooden fretwork and ornate timber brackets.

Inside, the Australian-edwardian style home was welcoming and cosy compared to the dark and gloomy colours and heavy fabrics that the Victorian predecessors preferred. It featured soft creams and light and airy neutrals, along with mahogany wood paneling and details.

This period lasted until the first world war.  There was a shortage of tradesman and the cost of houses had to be reduced.  From 1915 a less decorative house was built.  There were plainer style lead lighting in the windows and the ornate details were no more. These became known as ‘Bungalows’.

The quintessential Queenslander is a classic piece of Australian architectural design and really is Australia’s iconic home.  They were, and still are, typically found in Queensland (hence the name) and Northern NSW.  Also designed at the turn of the century.  The Queenslander  came about to provide relief from the lengthy, hot summer days and protection from tropical down pours.

Queenslanders were usually a single detached house built on high piers with a prominent exterior staircase.  This brought the main floor above flood levels.  But also allowed the cool air to circulate underneath providing natural ventilation through the house.

They were also characterised by broad, sprawling verandas on two, three or four sides of the Queenslander.  These verandas were shaded by corrugated iron roofing, lattice and roof ventilators.  These provided additional living space that was outdoors, yet protected. 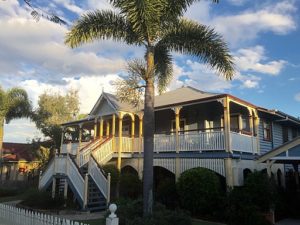 Indoors, the floor plan normally consisted of four to six rooms only.  So, today it’s common to find Queenslanders with rabbit warren layouts due to additional rooms built over the years.

Decorative features such as pressed-metal ceilings, detailed fret-work and casement windows were popular on these buildings.

Usually made entirely of wood, which does not retain the heat of the day as bricks do, Queenslanders kept the indoor temperatures cooler.

Queenslanders were initially a cheap housing option, but production tapered off after the second world war.  Materials became hard to find and lower maintenance homes on smaller blocks were more desirable.

For more information on Architecture, or for any decorating or design matters, please contact the team at Inspired Spaces http://www.inspiredspaces.com.au/contact/