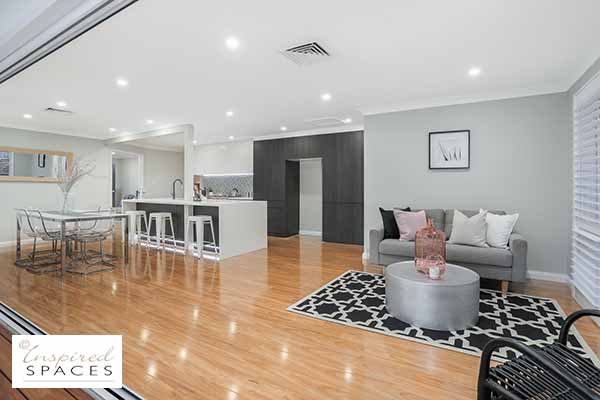 The best way to describe ceilings is to say that they are the finished surface on the underside of a roof or floor.

Ceilings are not classed as a structural element of a building.  But they can have a big impact on acoustic properties of a room and also things like lighting designs.

Most homes in Australia are built with a conventional plasterboard ceiling and are generally not noticed when you first walk into a room.  However, there are a variety of different shapes and materials that can be used for both decorative and functional purposes.  They can be visually more interesting and also change the look and feel of a room.

Here we take a look at a few of the different ceiling styles.  These can be found in both traditional and contemporary homes today.

Conventional flat plasterboard ceilings are the most common type of ceilings seen in homes.  They have no added details (apart from light fittings) and are a great cost-effective solution for the upper surface of a room.

Conventional ceilings can be made more decorative by adding cornice (or architrave) to the seams where the wall and ceiling meet.  The cornice can be ornate for a more traditional feel.   Or can be simple and minimal in design to give a more contemporary look. 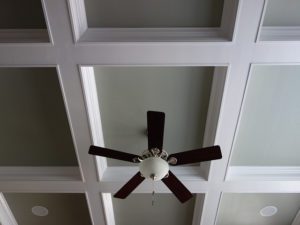 Coffered ceilings consist of sunken panels, usually square or rectangular in shape.  They sit in a grid-like form and can be there for both decorative purposes and/or to provide structural strength.

Beams that formed the grid on traditional coffered ceilings were usually made from timbers or stone.

However, today materials such as plaster products are available to help achieve this decorative feature more affordably.

Coffered ceilings were very common in Roman buildings and today they give a classic and elegant feel to your home.

Cathedral ceilings give a spacious feel to a room as the ceiling mimics the pitch of the roof.  They have 2 equally steeply sloping sides which meet at a ridge in the middle of the room, creating an inverted V.

The name ‘cathedral ceiling’ comes from the fact that cathedrals have the same shaped peaked ceilings.  They make the space bright and airy but also give the appearance of soaring into the heavens and being closer to God.

Also known as an inverted or recessed ceiling.  A tray ceiling is where the centre section of the main ceiling is slightly higher (or lower) than the area around the perimeter of the room.  They add an interesting visual element to a space and can ‘zone’ an area in open plans homes.

A dropped ceiling is also known as a suspended ceiling.  It is where a false ceiling is constructed below the main ceiling height.  They are commonly used in commercial buildings or residential properties where electrical or ducting services need to be installed and concealed. 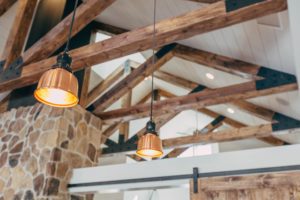 This type of ceiling is where the structural joists and beams supporting the house are exposed internally.

They are used as a feature, as apposed to being concealed like they generally are in most homes.

Exposed beams create visual interest, especially in large spaces and can add a warm rustic or traditional feel to your home.

Ceiling With A Bulkhead

A bulkhead is a section of ceiling that has been lowered and boxed-in to hide wiring or pipes.  They are commonly found in kitchens or bathrooms and can look amazing with special lighting features.

Shadow Lines are achieved by adding a recess in either the ceiling or the wall.   A specific metal stopping angle is lodged and nailed into place.

It is a more expensive finish.  Both the wall and ceiling sheets need to be cut neatly and correctly as there will be no material to cover rough edges.  This creates nice clean lines which suits a very modern home that requires a non-fussy and minimalist finish. 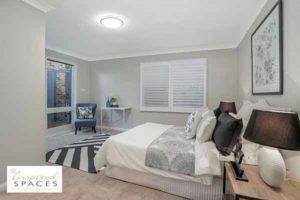 If you are renovating or building and would like to create visually interesting ceilings to your home, there are many products on the market, in both traditional and contemporary styles, which can help you achieve your goal.  It doesn’t have to cost the earth.

For professional advice on which type of ceiling would best suit your home, or for any interior design, decorating help please contact the team of Inspired Spaces today!