It’s not uncommon for design styles from other eras to come back into fashion and then go back out.  And also for some to become classics never to date.  The iconic style of ‘Mid-Century Modern’ is one of them.  But where did come from and why does it still influence design and style in our homes today?

The term Mid-Century Modern originated immediately after the end of the second World War by Cara Greenberg.  She used it to describe a particular architectural and furniture design style that was prominent in the US at the time.

Just as the name suggests, it spanned a period of around two and a half decades in the middle of the 20th century, from the mid-1940s to 1970. 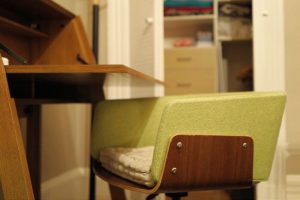 During this time when American soldiers were returning home, the population and economy boomed.  Suburbs of newly constructed homes grew quickly as many young families bought and furnished their first homes.

They wanted their post war homes to be different to those built a century before.   They used new materials and technology and were more efficient and functional in design.  The houses boasted more windows and open areas for family gatherings.

Mid-century modern homes created a connection with the natural world.  They brought the outdoors in and vice versa with the use of wide windows, sliding doors and patios.

Space needed to be used wisely as new homes were generally small.  However, they often came with an added garage or car port in order to house a vehicle.  Gone were the days of stuffy, overfilled rooms.  They were replaced by décor with clean lines and minimal fuss.

Interiors were all about organic style, simple lines and ease of living.  Functionality was paramount and every room needed to have a purpose.

The furniture reflected the same look of clean, simple designs as the architecture.  There was an emphasis on curves and geometric shapes. Natural materials such as leather, metal and wood were in high demand.

With limited resources, designers were creative and began to bend plywood and mold fibreglass using new technology.  Plexiglass was formed to create clear coffee and end tables.  Tubular steel and leather strapping were popular in the designs of cantilevered chairs.  Everything was more paired-back with less detailing

Furniture items that nested, stacked or folded were popular.  They were multipurpose and conserved space.  Tables were no longer just for eating..

As well as buildings and furniture, household accessories such as clocks, artwork, kitchenware and lamps also took on more simple styles and designs. 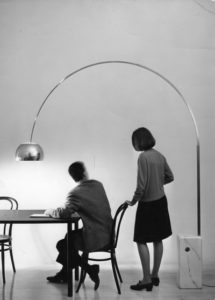 The Arco Floor Lamp designed by Achille Castiglioi and Pier Giacoma in 1962 is an iconic design of mid-century modern style.  It was designed to solve a specific lighting problem to have overhead or high lighting without any ceiling installations.  The body of the lamp and its super elongated arm was balanced against a heavy base made of marble.

The lighting of this era made a statement!  They were functional but also provided an artistic and sculptural element to a room.  Classic lighting of this time, other than the Arco Floor Lamp, are Sputnik chandeliers and Bubble lights.

Mid-century Modern kitchens were streamline, simple and cutting edge (for their time).  The introduction of time-saving gadgets and accessories (such as toasters) helped to create a more effortless and relaxed living environment.

The best thing about Mid-century modern Colours was that there weren’t a lot of rules!

Bright or saturated colours emphasised particular design elements.  Cobalt, poppy and mellow yellow were popular during this time.  Warm and earthy colours were also conducive to the Mid-century palette.  Often seen with pops of colour in order to keep things interesting.

Bold geometric patterns and strong curved motifs were widely used along with heavy textural fabrics, such as chunky knits and burlap.

No other era produced the same number of famous artists and designers as this period of time.  Charles and Ray Eames, George Nelson, Charles Pollock and Arne Jacobsen all created iconic furniture or lighting that are still recognisable to this day.

The era of the Mid-century modern style was fading fast by the mid 1960s.  The new generation combined with more modern materials and technology led to construction of larger homes resulting in new fashion tastes and design styles. 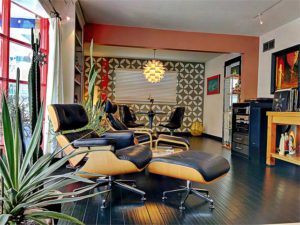 Bold prints, pops of colour and the iconic Eames chair give this space its mid-century mode

Mid-century Modern still remains popular today, especially in cities with small apartments where space is precious.  The simple, multi-functional objects of this era remain timeless and are necessary to complement a fast-paced lifestyle and incredible minimalist abodes.

It is certainly an era that has passed but it has not been forgotten.

To read our blog on the Art Nouveau style click here or here for Neoclassical architecture.